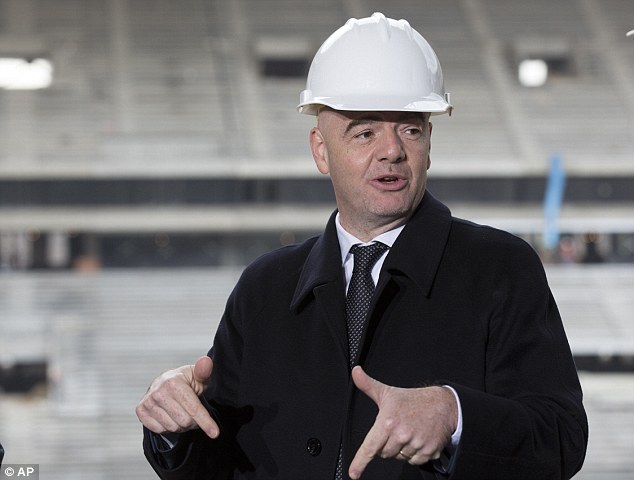 Suarez now has seven World Cup goals in his career.

How foreign-born players put the world in World Cup

All the World Cup tiebreaker rules and knockout-round scenarios, explained

Notable: Russias first-game explosion gave it the most goals and best goal differential in the tournament and its already in the round of 16 a nice accomplishment for a team that former player Andrei Kanchelskis called the worst Russian team I have ever seen before play began. A win or a draw will secure first place  in Group A.

Cavani FINALLY gets his goal!pic.twitter.com/PZqOGuMXG7

Uruguays Luis Suarez scores into the lower left corner on a close-in free kick in the 10th minute and takes off on a glorious celebratory slide.

Suarez opened the scoring early and Uruguay never looked back as La Celeste secured the top spot in Group A by beating Russia.

Not long after, Mario Fernandes replaces Cheryshev, Russias best player. Read into that what you will, given that Russia is also playing a man down with Igor Smolnikov sent off with a red card.

Russia played more aggressively in the second half on the scorching day, despite being down to 10 men after Igor Smolnikov was sent off with a red card for tripping. Uruguay finally capitalized in injury time, with Edinson Cavani sending a rebound into the net for the third goal of the game.

Luis Suarez puts Uruguay up 1-0 on Russia early in the game!pic.twitter.com/0Sa3aYzS5Y

Uruguay has already equaled its goal total from the first two games and Russia has given up more than it did in its first two matches.

We have our first set of teams confirmed!

Obviously, the first few matches youre tense and dont want to make any mistakes or lose. One mistake can be very expensive, Suarez said (via m). Today we came to the pitch with a different attitude and perspective and thats made the pressure better. Thats what we saw on the pitch.

Uruguayans LOVED how that first half went. ??

Notable: Uruguay finished fourth eight years ago in South Africa and would be disappointed by any less success.

With the win, Uruguay will play the Group B runner-up on June 30 in Sochi. Russia plays the Group B winner on July 1 in Moscows Luzhniki Stadium, a huge home-field advantage.

A long distance shot deflects into the back of the net to put Uruguay up 2-0.pic.twitter.com/RvwB8oKOcy

Both teams already had secured spots in the round of 16 and Uruguays win means it will play the Group B second-place finisher, still to be determined, on June 30 in Sochi. Russia will play the Group B winner July 1 in Moscows Luzhniki Stadium, a real home-field advantage. Spain, Portugal or Iran are the likely opponents to come out of Group B.

With Uruguay pressing, a shot by Diego Laxalt ricochets off the leg of Denis Cheryshev and goes into the net past Igor Akinfeev, giving Uruguay a 2-0 lead in the 23rd minute. Originally credited to Laxalt, the score was changed to an own goal by Cheryshev.

Uruguay turned on the energy late after relaxing early in the second half. Russia was pressing and playing more focused soccer, even with only 10 men, but could not muster a real scoring threat or miss.

Edinson Cavani finally breaks through in the 90th minute, giving Uruguay a 3-0 lead with his first goal of this World Cup.

Russia, with Denis Cheryshev coming out after an own goal, and Igor Smolnikov being sent off on a red card, looks as if it might be done. Uruguay opens the second half with Luis Suarez securing a free kick 25 yards from the goal, but Edinson Cavanis kick cant get past the wall even with Russia playing with only 10 men.

Belgium trounces Tunisia and sends a message to the World Cup

The World Cup is here. Want smart analysis, opinions, viewing guides and more?Sign up for our month-long newsletter. Every match day through the final July 15.

Read more about the World Cup from The Post:

Uruguay wasted little time in scoring with Luis Suarez sending a free kick from just outside the box into the corner of the net in the 10th minute.

Its a hot day in Samara, with the temperature hitting 91 at kickoff. To no ones surprise, the crowd is loud and Uruguay has controlled the ball in the very early going.

In the 23rd minute, Diego Laxalts long-distance shot glanced off Russias Denis Cheryshev and hit the net behind Igor Akinfeev. It was ruled an own goal and Uruguay led, 2-0, at the half.

Not sure why youd look away from UruguaysLuis Suarez, for his skill and for the controversy he seems to generate, even though he has only one goal. Also keep an eye onRodrigo Bentancur, the 20-year-old Juventus midfielder. For Russia, midfielderAleksandr Golovinhas played a key role in its surge, but he is out, replaced byAleksey Miranchuk.

Only Oscar Miguez has more with 8.pic.twitter.com/uct754cB2c