This was a first for both finalists, Arsenal of England and Galatasaray of Turkey, after they exited the Champions League in third positions. The game ended in a barren draw after extra time thus had to be decided on penalties. Galatasaray won 4-1. However, the day was not short of happenings as there were riots from both camps that resulted in four people being stabbed and others suffering injuries. 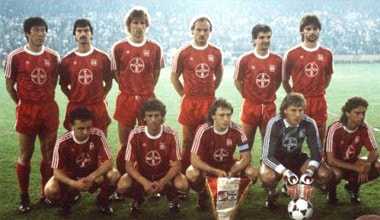 In 1982, IFK Goteborg of Sweden beat Hamburger of West Germany in both legs to win 4-0 on aggregate. Their next appearance in the finals was in 1987 where they commanded a 2-1 lead on aggregate over Dundee United of Scotland. IFK Goteborg is the only club from Sweden to reach the finals and to win the title.

Shakhtar Donetsk represented Ukraine for the first time in the final. The team managed to beat Werder Bremen of Germany 2-1 after extra time. It was the first UEFA Cup win for Shakhtar as well as the first major European trophy. 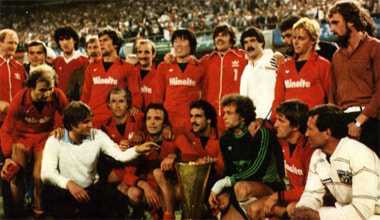 The 1989 UEFA Cup final was a clash between Stuttgart of West Germany and SSC Napoli of Italy. Napoli won the first-leg 2-1 and later drew 3-3 to become victors. 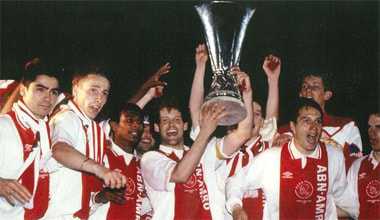 In 1985, Real Madrid of Spain won 3-1 on aggregate over Videoton of Hungary in the final. Later, English clubs faced a five year ban, with Liverpool facing a six-year ban, which prevented them from taking part in the 1985-86 competition. Real Madrid went on to secure the first successive win in the tournament by beating FC Koln of Germany 5-3 on aggregate in 1986.

Bayer Leverkusen of West Germany faced Espanyol of Spain in the 1988 Cup final. The tie ended in a 3-3 aggregate and Leverkusen won 3-2 on penalties.

Atletico Madrid of Spain were crowned winners under the transformed 2009-10 UEFA Europa League. Atletico won 2-1 after extra time over Fulham of England. Two years later, they faced their Spanish colleagues Athletic Bilbao in the final. Atletico Madrid won the match 3-0 to earn their second title.

Liverpool played Borussia Monchengladbach of West Germany in the 1973 final. Liverpool won the first leg played at Anfield 3-0 and went on to maintain a 3-2 aggregate after the second leg. Liverpool played their next UEFA Cup final in 1976, this time against Club Brugge of Belgium. The first leg ended 3-2 in favor of Liverpool who scored three goals in seven minutes of the second half to recover from Brugges 2-0 lead. The second leg ended in a 1-1 draw making Liverpool winners. In 2001, Liverpool defeated Alaves of Spain 5-4 after extra time in the final to make it three wins in three finals and levelling the record of title wins. 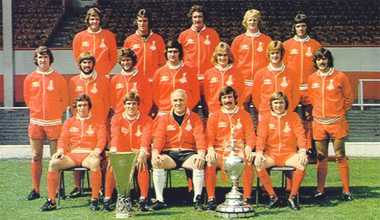 Sevilla of Spain secured the first title by thrashing Middlesbrough of England 4-0 in 2006. A year later they were put to test by Espanyol in an all-Spanish contest. The tough fixture ended 2-2 after extra time and Sevilla successfully converted the penalties to win 3-1. The win made it two titles for Sevilla in addition to being the second team to win the title in succession after Real Madrid set the record over two decades earlier. In 2014, Benfica were the finalists alongside Sevilla. Benfica lost 4-2 on penalties after the match ended goalless. Sevilla also claimed the 2015-2016 UEFA Europa championship trophy, they are the first five-time winners and the only side to claim three in a row.

Valencia of Spain, who were in an impressive form throughout the season, faced Marseille of France at the final. They emerged winners beating the French side 2-0 hence sealing a double as they had earlier won the domestic league.

The final tie of 2003 was a match between Porto of Portugal and Celtic of Scotland. The match ended 2-2 in normal play time and the tie was broken in the second half of extra time by a goal from Derlei, Porto. Porto got the second title during the 40th season of the competition when they outscored fellow finalists and Portugal club Braga by 1-0.

Internazionale faced fellow Italian club Roma in 1991, whom they beat 2-1 on aggregate. In 1994, Internazionale outscored Austria Salzburg of Austria 2-0 to win the second title. Dennis Bergkamp, Internazionale, was a top scorer in the competition with eight goals. Internazionale was in for another all-Italian final tie in 1998 when they faced Lazio. The final was the first single-leg tie held at a neutral ground. Inter won 3-0 to be the second team to win three titles after Juventus.

Monchengladbach triumphed 5-1 on aggregate over Twente of the Netherlands in the 1975 final. The first match had ended goalless but Twente went on to suffer humiliation at home two weeks later. The next appearance for Monchengladbach in the UEFA Cup final was in 1979 when they faced Red Star Belgrade. Monchengladbach won 2-1 over Belgrade to seal their second title victory. 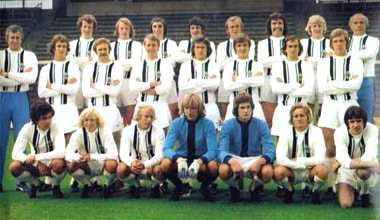 check out this football world cup winners list and explore each teams road to victory. 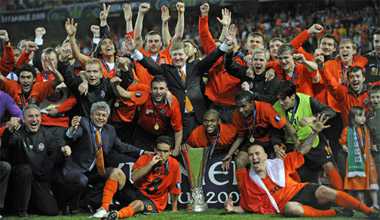 Feyenoord Rotterdam of Netherlands won 4-2 on aggregate against Tottenham Hotspur in the 1974 Cup final. The first leg played at White Hart Lane ended 2-2 and Feyenoord went on to win 2-0 at home to win their first title. Spurs fans ran riot after losing the match in Rotterdam. 28 years later, Feyenoord routed Borussia Dortmund 3-2 in the final to raise the tally to two titles. 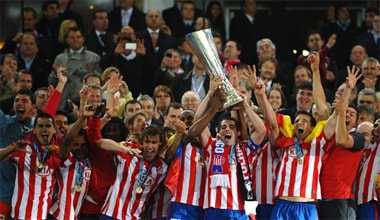 Spurs won the final of the inaugural UEFA Cup competition. The final was an all English affair as they played Wolverhampton Wanderers. Tottenham won the first leg 2-1 and went on to maintain a 3-2 aggregate after the return leg to secure the first UEFA Cup title. Though they later lost in the 1974 final, Tottenham were at it again in 1984 when they beat the defending champions, Anderlecht, 4-3 on penalties after levelling 2-2 on aggregate. 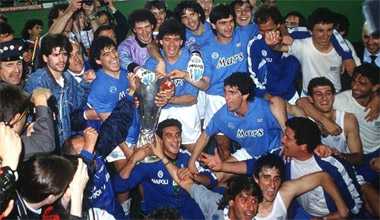 Ipswich Town of England outscored AZ 67 of the Netherlands 5-4 on aggregate to win the final in 1981. Having lost the first-leg 3-0, AZ 67 put on a hard fight in the second leg to win 4-2, though it was not enough to ensure a victory for them. John Wark, Ipswich, scored a record 14 goals in the competition.

The 2013 finalists were Chelsea and Benfica. Chelsea had been eliminated from the Champions League at the group stages despite being the defending champions. However, advancing to the finals of the UEFA Europa League then winning 2-1 was the perfect consolation.

Bayern Munich of Germany played Bordeaux of France in the final contest of the 1995-96 tournament. The German side comfortably won the two legs to defeat Bordeaux 5-1 on aggregate. 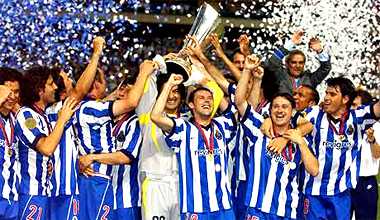 Juventus of Italy played Athletic Bilbao of Spain in the 1977 final tie. Juventus won their first European title through away goals after the two teams equaled 2-2 on aggregate. The team managed this achievement without any foreign player in their starting squad. Juventus then defeated Italian counterparts, Fiorentina, 3-1 on aggregate in 1990. Another 6-1 comfortable triumph on aggregate over Borussia Dortmund of Germany in 1993 put Juventus on a record three titles.

the list of the Gold Cup title-holders, champions history list by year, including the runner-ups, teams who participated and the host nation. 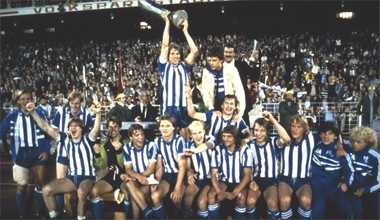 The Cup final in 1978 was a contest between PSV of Netherlands and Bastia of France. After a goalless first-leg draw, PSV Eindhoven won 3-0 at home to secure the UEFA Cup winners title.

The winner of the 1996-97 UEFA Cup was determined by a contest between Internazionale and Schalke 04 of Germany. Both teams won 1-0 at home and Schalke managed to outshine their opponents 4-1 on penalties.

The most successful clubs in this competition are Juventus, Internazionale, Liverpool and Sevilla with three titles each. The Inter-Cities Fairs Cup is recognized as the forerunner of the UEFA Cup but not an official competition under UEFA. Here is the UEFA Europa League winners list:

CSKA Moskva of Russia and Sporting CP of Portugal were the 2005 UEFA Cup finalists. Moskva came from behind to win 3-1 plus become the first Russian side to acquire the title.

what are the teams that have won the most prestigious European Cup? All the European Nations Cup champions since 1960.

Zenit St. Petersburg`s opponents at the finals were Rangers of Scotland. The Russian club won the match 2-0. Zenit is the second team from the Russian region to win the UEFA Cup competition. 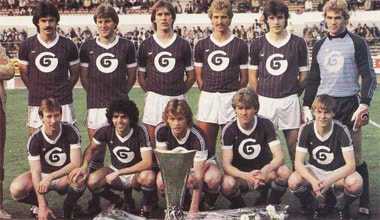 The final of 1995 was an Italian affair involving Parma and Juventus. Parma won 1-0 at home and were held to a 1-1 draw away granting them a victory on aggregate. Four years later, Parma faced Marseille of France in the final which they won 3-0 to claim another Cup title. 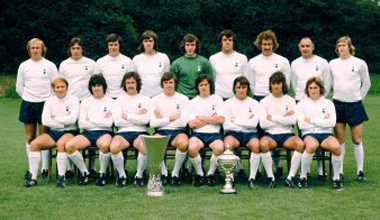 Ajax were crowned champions over Torino in the 1992 final. Torino managed a 2-2 draw at home, followed by a goalless draw in Amsterdam. Ajax got the advantage based on away goals.

Anderlecht of Belgium faced Benfica of Portugal in the final of 1983. Anderlechts 1-0 first-leg win at home propelled them to a 2-1 win on aggregate marking the sole title held by a Belgian side in the tournament.