Champions League and Europa League draws, 2017/2018 quarter-finals: as it happened 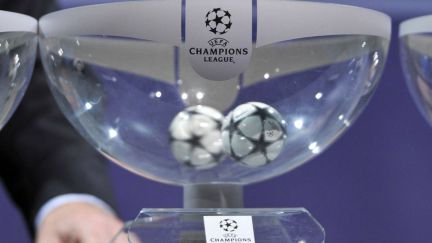 More reaction from Romas spanish sporting director, Monchi: Barcelona are favourites, but nobody should write us off, says the former Sevilla supremo, who also had his say on the Andalusians being paired with Bundesliga giants Bayern Munich. Sevilla and their fans deserve to be in the Champions League, he said. As Ive said about Roma, no-one should them write off against Bayern.

Almost too quick… Whoda thunk it?

Uefa secretary general Giorgio Marchetti is up and having a chinwag with AC Milan ledge Andriy Shevchenko, who, as you might imagine, is saying all the right things about winning the Champions League being a dream and the pinnacle etc, etc.

Real Madrid, Barcelona and Sevilla take their places in the hat for the last eight of the Champions League at 12:00 CET, before Atltico Madrid find out the identity of their Europa League opponents from 13:00 CET.

With five Premier League clubs in the Champions League last 16, it was all looking rather like the year that Englands top flight knocked LaLiga off its perch, to quote a certain red-nosed Scotsman. But, as AS editor Alfredo Relaño noted yesterday, it hasnt really turned out that way, has it?

The three Spanish clubs in the hat avoided each other in Fridays Champions League quarter-final draw in Nyon, but the Premier Leagues two remaining representatives will face off.

And we get underway! Out comes the first tie: it is… Barcelona vs Roma!

Oh, and dont forget that you have a brief preview that we rather hope will furnish you with the info you need in advance of Uefas ball-plucking fest. You will find that at the bottom of this page.

In the draw for the Europa League quarter-finals, meanwhile, the only LaLiga team left in the tournament, favouritesAtltico Madrid, were pitted against Portugals Sporting CP.

Spain has four representatives across this lunchtimes two draws, with three – Real Madrid, Barcelona and Sevilla – in the hat for the Champions League quarters, and one – Atltico Madrid – in the line-up for the Europa League.

The day Hierro discovered Isco: I saw him and left the pitch

The third tie is… Juventus vs Real Madrid! A repeat of last years final!

Were going to wrap up this live text now. Hope youve enjoyed reading!

So: Barcelona vs Roma, Sevilla vs Bayern Munich, Juventus vs Real Madrid and Liverpool vs Manchester City. Ties to be played on 3/4 April and 10/11 April, first name in each tie is at home in the first leg.

Real Madrids director of institutional relations, Emilio Butragueño, has offered his reaction to Los Blancos being drawn with Juventus: Difficult, said the former striker. I think Spurs were better [than Juve] for much of their tie; that the Italians went through says much about them. Well have to be at our best. But we have once more shown what were capable of in our last-16 tie against PSG.

All four of the Europa League ties will be played on 5 and 12 April, meanwhile.

It cant be said that the draw was very kind on us, says Roma sporting director Monchi on the Italians tie against LaLiga leaders Barcelona.

Atltico Madrid director Clemente Villaverde reacts to Los Rojiblancos being paired with Sporting CP in neighbouring Portugal. Atleti are very happy with the tie, he says, particularly as its a very affordable trip to Lisbon for supporters of the Spaniards.

As is detailed in our preview below, the first legs of the Champions League quarter-finals will be played on 3 and 4 April, with the returns held on 10 and 11 April. Uefa are expected to confirm the last-eight fixture schedule in the hours after the draw.

Oh, and another date for your diary: the draw for the semi-finals will be on 13 April.

This morning, meanwhile, the AS front page leads with the results of our fans survey. We asked supporters of Real Madrid, Barcelona and Sevilla who theyd like their club to face, and they answered: Roma yes, Juve no.

Join to the sexy contacts online community, live your adventure.¡Sign up!.

Both will be open draws- meaning that. there will be no seedings system, andclubs from the same national association will not be kept apart- while, in each tie, the first name out will be the home team in the first leg.

Incidentally, if you are looking to add sounds and moving images to our live-text coverage of the Champions League and Europa League draws, then you may wish to avail yourself of our rather useful little guide onhow and where to watch.

Official retro t-shirts English football clubs, be inspired by the most important moments of the premier.

(First team mentioned is at home in the opening leg)

That draw was rapid once more, by the way. Me likey.

In case you missed it, we have prepared a guide on the players who will be out through injury or suspension in the Champions League quarter-finals.

Expect goals in Liverpool vs City… Weve looked at the Opta numbers behind each quarter-final tie.

By the way, the betting appears to have Manchester City, who beat Basel to reach the quarter-finals, are favourites, ahead of Barcelona and then holders Real Madrid. That second-leg defeat to the men from Switzerland seems not to have damaged the bookies faith in Pep Guardiolas swashbuckling side, then. Speaking of Pep: there is of course the potential for the ex-Barça boss to come up against either his former club – as he did with Bayern Munich in the 2014/15 semi-finals – or the Blaugranas arch rivals.

By the way, we carried out our own mock-Champions League draw earlier this morning (complete with 45 minutes of droning exposition on the mechanics of said draw, you will be relieved to hear). It turned out thusly:

Atltico will, of course, be without Brazil left-back Filipe Luis, whohas been ruled out of the World Cupafter being stretchered off with a fractured shin bone in Thursdays last-16 second leg at Lokomotiv Moscow.

And in the competitions first all-English match-up since 2010/11,Liverpool will meet Manchester City.

Good morning! Ready for some drawtastic action! We are tingling with anticipation at AS Towers.

The first team out of the hat is at home in the first leg, remember.

Barcelona director Guillermo Amor says the Blaugrana are confident after the draw, but adds: If we were fearful going into the draw, I dont want to imagine how wed be going into the actual tie.

Sevilla vs Bayern and Juventus vs Real areto be played on 3 and 11 April, while Barça vs Roma and Liverpool vs Citywill take place on 4 and 10 April.

It wont be easy at all, but were really excited to be here. And were out to achieve something big in Europe. Whoever wed have been given, it would have been tough, says Sevillas sporting director scar Arias in reaction to the Spaniards quarter-final tie with Bayern Munich, who have now been installed as third favourites to lift the trophy. Sevilla, meanwhile, are the least-fancied of the eight quarter-final sides… But then they werent given too much of a prayer against Manchester United, were they?

The line-up for the quarter-finals of the Europa League, which comprises eight clubs from eight different countries, is:

Right, now its time to turn our focus to the Europa League quarter-final draw. Atltico Madrid are Spains only representatives, having swept aside Lokomotiv Moscow 8-1 on aggregate. Athletic Club, meanwhile, were comprehensively knocked out by Marseille.

Amor is also asked whether it would be a failure if Barcelona didnt win it the Champions League, having seen their arch rivals, Real Madrid, win the last two. I think its a failure if you havent prepared right, worked hard and competed well; but we know that wont be the case, sidesteps Señor Amor. 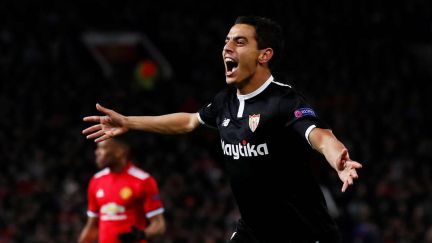 Fresh from sensationallydumping out Manchester Unitedin the round of 16,Sevilla were given a tough last-eight tiewith five-time winners Bayern Munich.

The first legs will held on 5 April, with the second legs on 12 April.

And off we go! Theyre in a hurry today.

The ties will be played on 5 April and on 12 April. As with the Champions League, the first team out of the hat in each tie is the home side in the opener.

A reminder that the Champions League and Europa League draws will both be of the open variety; that means that there will be no seeds, and teams from the same countries can face each other.

Next is… Sevilla vs Bayern Munich. 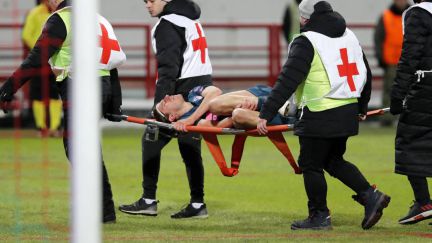 …and now we have Marchettis Moment: the explanation of the draw format!

Sevilla, of course, are in the quarter-finals of Europes top club competition for the first time since the 1950s, after theirstunning 2-1 win over Manchester Unitedat Old Trafford this week. Wissam Ben Yedder was the hero, grabbing two goals off the bench to shock the three-time winners, who, it must be said, played dreadful, negative football throughout the tie, and got what they deserved. As for Spains other two representatives, holders Real Madrid fairly comprehensively swatted aside Paris Saint-Germain, while Barcelona (and particularly Lionel Messi) were just too good for Chelsea, punishing the Blues schoolboy errors to advance at their expense.

The three LaLiga teams in the Champions League quarters are joined bytwo from the Premier League, two Italians and one from Germany.

As with the Champions League, it will be an open draw: no seedings, clubs from the same countries not kept apart.

(First team mentioned is at home in the opening leg)

The first legs will be played on 3 and 4 April and the returns are to take place on 10 and 11 April, withUefa due to publish the confirmed fixture schedule in the hours after the draw.

We have confirmation of the Champions League quarter-final fixture schedule: Sevilla vs Bayern Munich and Juventus vs Real Madrid are to be played on 3 and 11 April, while Barcelona vs Roma and Liverpool vs Manchester City will take place on 4 and 10 April.

Holders Real Madrid will take on Juventus in a repeat of last seasons final, while Barcelona were handed a clash with the other Italian side in the draw, AS Roma.

So it has to be an all-Premier League clash!

With three Spanish teams in the draw, there had been much talk of the potential for an all-LaLiga tie, and even the possibility of a Champions League Clsico. I want to get Barcelona and put an end to this Messianic nonsense! AS journalist and number-one Real Madrid fan Toms Roncero had tweeted earlier.

Our Spanish-language colleagues also havea live feed of the two drawsup and running, if the language of Cervantes happens to be your thing.

While are Bayern are now the bookies third favourites to lift the trophy, that draw has seen Barcelona leapfrog Manchester City to the top of the Champions League betting, reports AS journalistSergio Santos Chozas. Despite being holders, Real Madrid have slipped to fourth favourites after being paired with Juventus.

The first legs will be held on 5 April, with the ties then decided seven days later.

The draw for the Champions League quarter-finals is first up in at Uefa HQ in Nyon, Switzerland, with the balls being plucked from the hat from 12:00 CET. An hour after that, well then learn the last-eight pairings in the Europa League.

We start off with a fancy, dramatic-music-tastic video introducing the teams in the quarter-final line-up. I can feel my first get on with it!? coming already.